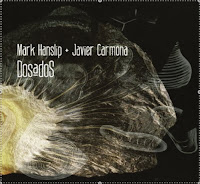 DosadoS, a CD I made with drummer Javier Carmona, will finally be released on January 8th on the Babel Label. You can already buy copies through me (email address on right) or download through Babel's new Bandcamp page, or the new Loop website.

It's already had some nice pre-release reviews and airplay (more of that sort of stuff on the Hanslip/Carmona Duo page). It's been interesting to see some of the more jazz-oriented journalists (the record is all improvised bar one tune, and often goes pretty far left of the free-jazz that you might expect) write in some detail about it and give it a proper listen, as well as hearing the opinions of some of the more specialised critics. I like the idea of musicians and writers being in a kind of reciprocal relationship and reading some reviews of the duo CD and the recent Twelves record gave me some new listening to do.. Lou Gare and Eddie Prevost came up a few times in Dosados reviews, while Twelves were likened to Last Exit, Power Tools-era Frisell and Prime Time Ornette, so I geeked out and stocked up on some new shiz./

Gig-wise, Javier's relocation to Barcelona has presented an obstacle to our duo's continuation, but we are starting to plan for 2012, which may well include a recording/gigs in a trio with Federico Reuben on laptop, who we did a Resonance FM broadcast with in October. Recordings from that session are on the Live Bootlegs page.

Anyway, here's a track from DosadoS in the meantime:

Preambolo to Nipple 2 - duo with Javier Carmona by Mark Hanslip

Other news-wise, the trio with Mark Sanders on drums and Mike Hurley on piano is cooking very nicely indeed, and will be playing at the Vortex on September 20th, at The Oxford on October 17th, and as part of a Loop Collective night for the London Jazz Festival/Greenwich Alternative on November 14th.

Jonathan Bratoeff's W.O.M.F. project with Marcina Arnold went into the studio in June, coincidentally on the hottest couple of days of the year (the live room at Antonio's was about sauna temperature for two days), the results of which are being mixed at the moment and will surface fairly soon.

The vinyl/download-only release of 'Things Will Be' by Examples of Twelves has been getting some nice reviews. It was a fun session.

Drummer Tony Bianco's new project is rehearsing at the moment. Playing with Tony pushes me hard, but it's hugely freeing and enjoyable at the same time. Also I feel his compositions fit well with my improvising language, in a kind of pan-tonal, Slonimsky-ish kind of area.

For 2012:
(and speaking of being pushed) I'm very excited about playing a duo concert or two with amazing altoist Stephane Payen, in early January, first confirmed date being January 8th @ the North London Tavern, Kilburn. He and I played together in private sessions and on a gig in Paris a few years ago, both with the group Outhouse, and I felt we had a good connection then, so it's nice to have the chance to play with him again all this time later, and this time in duo..! Between now and then, I shall be practicing, lots..

I'm also starting to look for dates for a new trio with Dominic Lash on bass and Phillip Marks on drums - we haven't actually played as a trio yet, but Dom and Phil have played plenty together (they're on a recent Tony Bevan CD in a quartet with Paul Obermayer on laptop), Phil and I played a duo set (for the first time) at a Frakture night in Liverpool in March of this year, some of which you can hear below, and, after some bouncing around of emails to unanimous and mutual enthusiasm, we decided to give it a bosh. Dominic is spending most of 2011 in New York (playing with trumpeter Nate Wooley among other such notables.. will be interesting to see what he brings back with him!), so the first dates won't be before early 2012. Phillip is one of my favourite drummers around today. He has an amazing trio called Bark! which you should hear.

For a lot of jazz-involved musicians in England, the weekend brought the news of Richard Turner's passing. Richard achieved an amazing amount in his time in London, pulling off the near-impossible feat of successfully running a regular jazz night (Jazz @ The Con Cellar Bar) for several years (as we all know, many much wealthier and time-rich individuals and even groups of promoters have struggled in this endeavour) and simultaneously enjoying a growing career as a trumpet player. He was responsible for bringing sought-after musicians over from the US, and was unafraid to take risks in his programming. Rich gave me an early shot at leading a group (I think I played the first ever jazz night at the Con with a straightahead-ish quartet) and later on gave me chances to play with fully improvised groups, despite this not being what the Con was generally thought of as being a place for. But bigger than that, the Con nights took on a life of their own, and became a home for his generation of players. He was too young, 26 I think. RiP. :(
Posted by Mark Hanslip at 08:52