Compilations Month! and other News, and a bit of press 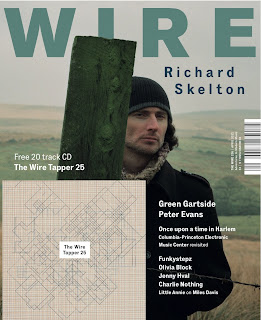 Javier and I are chuffed that a 4 minute edit of a track from our almost-released duo CD is featured on The Wire Tapper 25, a compilation CD of 20 tracks which comes with the April edition of the Wire Magazine.


A longer version of the same track also appears on a sampler CD of various artists from the Babel Label, free with the April edition of Jazzwise, and is also featured on a new compilation CD of artists from the Loop Collective, presented at the annual festival, this year at The Forge venue in Camden.

SPEAKING OF WHICH.... Javier suffered a hernia (ow), which means firstly that he's in some discomfort and needs an operation, but also that we didn't play any gigs yet this year, including what should have been the official CD launch at the Loop Festival at the Forge.

Very luckily, a fantastic trio I've been working with lately, with Mike Hurley on piano and Mark Sanders on drums, stepped in to fill the slot on March 19th, as well as the Birmingham gig on March 15th. While its a relatively new project, all the gigs have been pretty happening and there's some really interesting music starting to develop between us, so it was a treat to be able to play twice in one week with this group.
Also luckily, Philip Marks, a great Manchester-based drummer/percussionist who I'd heard once down here in duo with Mick Beck, and knew of through our mutual friend Olie Brice, was able to come and play in duo (much to my mother's delight, as it turned out), as well as in a quintet with some local improvisers, at the Frakture event up in Liverpool. I really enjoyed playing with Phil for the first time and I hope we get to play together again in some way soon. Interesting last set too, in an ensemble with lots of electronics, not something I get to do very often. There's now some audio of the evening up on the Private Recordings page on this site, link at the top.
Anyway this might cheer Javier up - John Fordham had this to say about our CD in last friday's Guardian:
Hanslip's partnership with percussionist Javier Carmona has all the hallmarks of a spontaneous free-jazz and improv encounter – scurrying sax phrases accompanied by light, pattering figures; long multiphonic outbreaths against softly ringing noises; water-over-rocks cymbal patterns; guttural sax blasts driven by racing free-swing or suddenly stopped short. But the erudition and resourcefulness of both players gives this ostensibly austere session a rare eventfulness. Hanslip understands boppish improvising inside out, and his rounded sound and dense, accumulating lines suggest the 50s Cool School sax master Warne Marsh – but in more impressionistic mode. Carmona is a subtle and very propulsive drummer who sometimes canters alongside Hanslip, sometimes spurs and sometimes trails him. It's the kind of music that could even make free-improv's sworn enemies say, "OK, now I get it."
There have also been some nice reviews for the new Twelves CD 'The Adding Machine', including a 5-star review in June's BBC Music Magazine, and a 4-star feature in March's Jazzwise (both of which, unbelievably, insist on people paying for in order to read them..). But there are some online ones too:
http://www.bbc.co.uk/music/reviews/294z
http://www.musicomh.com/albums/twelves_0311.htm
http://www.thejazzmann.com/reviews/review/the-adding-machine/
http://cardboardmusic.blogspot.com/.../twelves-adding-machine-and-before.html
http://www.list.co.uk/article/33381-twelves-the-adding-machine/
http://londonjazz.blogspot.com/2011/03/cd-review-twelves-adding-machine.html
http://freejazz-stef.blogspot.com/2011/03/twelves-adding-machine-babel-label-2011.html
http://www.guardian.co.uk/music/2011/apr/07/twelves-the-adding-machine-review
http://thejazzbreakfast.wordpress.com/2011/04/24/cd-review-twelves/
I'm off to do some practice now.
Bye
Posted by Mark Hanslip at 08:06